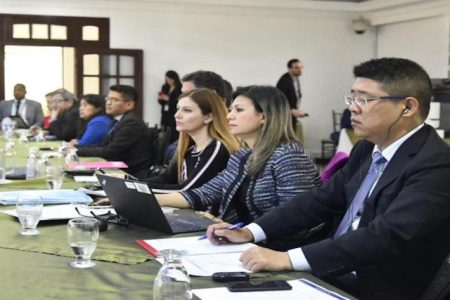 During 2019, the Counter-Terrorism Committee Executive Directorate (CTED), the United Nations Office on Drugs and Crime (UNODC), and the International Association of Prosecutors (IAP) co-organized six regional and national workshops around the world about enhancing Cooperation and Strengthening Capacity in Obtaining Digital Evidence from Internet Service Providers (SPs) in Counter-Terrorism and related Organized Crime Cross-Border Investigations.

The workshops are within the framework of their joint global initiative on the legal access to digital initiative across borders. Work conducted by CTED and its partners on the Global Initiative is in line with Security Council resolutions 2322 (2016) and 2396 (2017) as well as the Addendum to the Guiding Principles on Foreign Terrorist Fighters (2018).

In February, a training was held in South Africa for Cybercrime Focal Points and Central Authorities of the Commonwealth African countries and Ethiopia. A regional workshop held in March, was co-organized with the Commonwealth Secretariat in Australia for countries in South Asia, the Southeast Asia region, and the Pacific Island States. In May, the Global Initiative was introduced to Latin American countries in partnership with the Organization of American States (OAS). In June, a national workshop, organized by partners of the Global Initiative and the Government of Pakistan, was held in Islamabad. Two regional workshops, (one in Malaysia in November 2018 and the other in the Maldives in October 2019), were conducted for countries in South Asia and Southeast Asia. The last regional workshop of 2019 will take place in December. It is organized in cooperation with the Organization for Security and Co-operation in Europe (OSCE) and will focus on Central Asian countries.

These technical assistance workshops aimed to enhance the capacity of central authorities, prosecutors, and investigators to request, preserve and obtain electronic evidence through international cooperation, including Mutual Legal Assistance (MLA) requests and direct requests to communication service providers (CSPs), with the objective of bringing terrorists to justice.

Workshop participants included experts from international and regional organizations, as well as representatives from civil society and CSPs. Discussions focused on recent legislative developments in relation to current practices of participating Member States in the gathering and use of electronic evidence; procedures, good practices and challenges for the timely preservation of data; voluntary disclosure requests and emergency disclosure requests; and mutual legal assistance.

The workshops also provided an opportunity to introduce and train practitioners on the CTED/UNODC/IAP Practical Guide for Requesting Electronic Evidence Across Borders currently available in English, Portuguese, Russian and Spanish. Arabic and French versions will be available soon.

CTED will continue working collaboratively with UNODC and IAP, as well as other strategic partners of the initiative in supporting Member States to obtain electronic evidence across borders and to enhance international law enforcement and judicial cooperation and cooperation with CSPs.