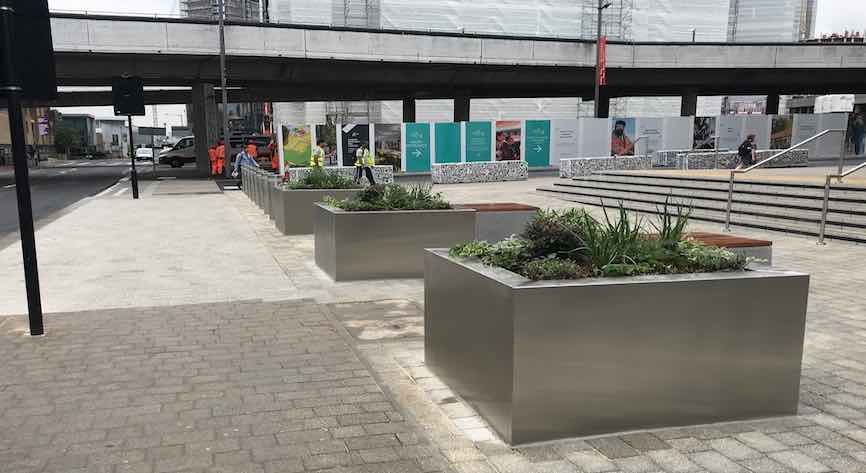 A leading specialist manufacturer of hostile vehicle mitigation (HVM) products has protected sports fans and concert-goers by installing a row of PAS-68 planters in the shadow of Wembley Stadium.

Securiscape, which is based in Derby, supplied five of the 1.4m square reinforced planters, which have been fitted into the pavement alongside Engineers Way, close to the flyover taking supporters up to the stadium.

The work is part of an ambitious project to create Wembley Park, an 8.8 million sq ft mixed-use development consisting of apartment buildings, retail units, offices and a seven-acre park.

It is the second time that Securiscape has supplied planters for the area, having previously installed seven planters across the entrance to Brent Borough Council’s nearby civic centre, which provides office space for 2,000 council employees and houses the borough’s library and is just a few yards away.

The planters are positioned to ensure that they do not impede the progress of pedestrians and, to the naked eye, look like a row of stylish designer planters finished in a brushed stainless-steel shroud.

However, underneath the shroud lurks a high-tech steel framework which surrounds a tough polyethylene planter and has been proven capable of stopping a 7.5 tonne truck travelling at 40mph in its tracks, earning it the industry’s coveted PAS 68-2010 standard.

Mark Stone, managing director of Securiscape, said: “Our PAS 68 security planters have added a stylish and safe finishing touch to Brent Civic Centre, which is why we received this second order for Wembley Park.

“The planters are in place now and they look just as good as those around the corner. We’re extremely proud to have been asked to supply a second row of planters for such a prestigious development. While we hope that their defensive capability is never required, we’re happy that they are affording local residents and workers peace of mind and helping to enhance one of the most ambitious and iconic redevelopment projects in London.”

Securiscape has designed, manufactured and installed a wide range of outdoor security products, including reinforced bollards and street furniture, blast-resistant litter bins and its ingenious SecuriPods, a temporary defence which can be installed in minutes to protect pedestrians attending outdoor events.

It has worked for clients across the UK and its products can been found outside high-profile buildings, including banks, sports stadia and airports, in London, Leeds, Edinburgh, Birmingham and Nottingham.