Disaster in Beirut and political negligence 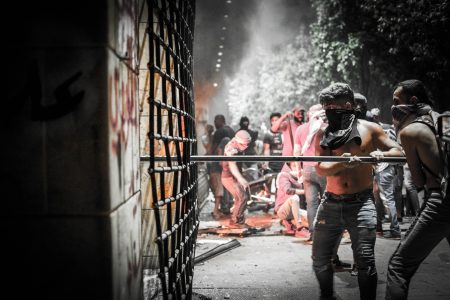 The Beirut explosion, caused by the mishandling and storage of a highly reactive chemical, has sparked outrage across the world against port security and political governance

The explosion, on August 4, at around 6pm local time, appears to have been fuelled by 2,750 tons of the highly reactive chemical ammonium nitrate. The chemical had been the cargo on a ship, the MV Rhosus, which entered the port at Beirut in 2013 due to a lack of seaworthiness and was prohibited from sailing. After the ship’s owner abandoned the vessel soon afterwards, the ammonium nitrate remained in a storage facility in Beirut’s port.

The tragedy calls to attention the tremendous consequences of a lack of port security. And the necessity for security preparation for such disasters.

Hazardous material is shipped across the world’s oceans on a daily basis. It is often mishandled or illegally traded. Abandoned containers of hazardous goods are found regularly in ports. While maritime security tends to focus on preventing high-profile events such as piracy, terrorism or cyber-attacks, all too often it is the daily mishandling that makes disasters possible. Part of preventing disasters such as what has happened in Beirut will mean strengthening port management and addressing crimes such as smuggling and corruption.

The abandonment of dangerous containers in ports is not a new problem. Since the 2000s there have been significant efforts to increase security levels in ports through surveillance, training and safety protocols. In light of the continuing abandonment problem, we know that these measures – and their implementation – are insufficient.

First, we have to start seeing the smuggling of waste and the abandoning of ships and containers as major offences. They should be seen as important parts of the blue crime and maritime security agenda. Appropriate legislation is needed to criminalise them. An international database for such crimes is required, as is transnational cooperation to address them.

Second, corruption in ports plays a key part in ensuring that abandonment goes unnoticed. It needs to be addressed with a concerted international effort.

Finally, increased efforts in building the capacity of ports to deal with hazardous waste, to detect smuggling and to deal with abandonment cases are needed. In particular, this will be necessary for ports which have limited resources and are common destinations for abandoned containers, such as ports in Asia and Africa.

The UN Office on Drugs and Crime, the International Maritime Organisation and the European Union already conduct port security capacity building work, in particular in Africa. More of this kind of work is needed. Beirut has shown us the kind of impact a port disaster can have on a city and its inhabitants. Lessons must be learned to make sure a tragedy like this does not happen again.

Lebanon’s cabinet declared a two-week state of emergency in the capital city and handed control of security in the capital to the military following the massive explosion that killed at least 154 people and injured 5,000 others.

The explosion sent shockwaves across the city and the world, causing widespread damage as far as the outskirts of Beirut. Officials said they expect the death toll to rise further as emergency workers continue to dig through the rubble to search for survivors. Beirut’s city governor Marwan Abboud said up to 300,000 people have lost their homes and authorities are working on providing them with food, water and shelter.

While government assistance to the blast victims has been minimal, foreign aid has streamed in, along with technicians and medics who are helping identify buildings at risk of collapsing and treating the wounded.

The office of President Emmanuel Macron of France announced that an international aid summit will be held by video conference on Sunday, co-hosted by France and the United Nations. President Macron was the first foreign leader to visit Lebanon since the blast, and he walked through some of the hardest hit areas to speak with residents, something that Lebanon’s own president and prime minister have not yet done, which is likely to avoid becoming the targets of public anger.

The United States is providing more than US$15 million in aid, and President Trump stated that he would join the video conference to discuss foreign aid. Ahmed Aboul Gheit, the Head of the Arab League, released a statement saying that he would seek to mobilise support from Arab countries after meeting with President Aoun. “We are ready to help with all our means,” Mr. Aboul Gheit said.

The aftermath of the explosion and the realisation of negligence from government and port security sparked a backlash from citizens of Beirut and its surroundings. Violent clashes between demonstrators and security forces transformed much of central Beirut into a battle zone of flying rocks, swinging batons and clouds of tear gas. The fury fueled attacks and lock ins on government buildings throughout the city…

To read the full article keep your eyes open for the latest edition of Security Buyer which will be hitting the shelves in the next couple of weeks. This article is our cover story and also looks into the protests and rioting that have been happening as a result of the explosion.