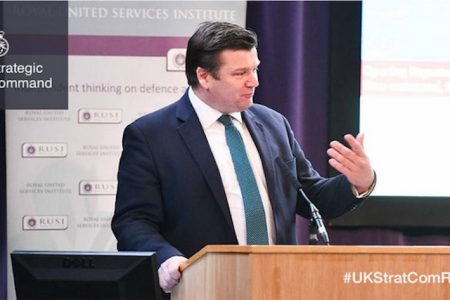 Minister for the Armed Forces, James Heappey, used his first keynote speech in the role to explain how Britain must modernise to compete in the information age.

In his opening remarks he said: “It’s no longer enough to have a battle-winning edge in terms of fire power; there’s a responsibility to win the information battle.

“It’s no longer enough to have highly complex systems; you need all of the data that comes from that system in order to get a better understanding of what the enemy is doing and what the opportunities are to exploit and win the battle.

“And it’s no longer enough to just fight successfully in individual domains. Winning the fight of the future requires integration across land, sea, air, cyber and space. Strategic Command will give us that edge.”

The minister also outlined how exiting the European Union will allow the UK to “redefine our place in the world” across a number of sectors, including defence.

The Conference set out the ambition for Strategic Command, and attendees heard more about its enhanced responsibilities.

General Sir Patrick Sanders, Commander Strategic Command explained the critical role of the Strategic Command: “Strategic Command will transition the industrial age Joint Force to the Information Age’s Integrated Force. We will strengthen the foundations of integration within the current force and experiment and develop the capabilities and structures required for the 2030s and beyond.

“This will be achieved in three priority areas: cyber, special forces and multi-domain integration, all are transformative, all are essential.”