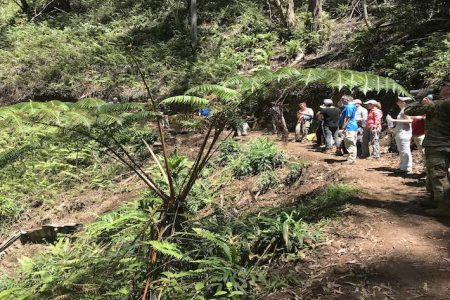 Academics at Cranfield Forensic Institute (CFI) are working with the US Department of Defence (DOD) as part of a new collaboration to recover and identify service personnel unaccounted for from World War Two.

There are thought to be around 72,000 American personnel still unaccounted for from WW2 alone, with around 39,000 deemed to be recoverable.

The Defence Prisoner of War/Missing in Action Accounting Agency (DPAA) is collaborating with the team of archaeologists and anthropologists from Cranfield as part of its efforts to forge new relationships with experts and enhance its recovery efforts.

Scientific and field skills familiarisation training was recently provided by the DPAA Academy at Joint Base Pearl-Harbor Hickam, Hawaii. The orientation was tailored to environments in which the recovery teams will be working and included information on identifying WW2 aircraft and crash site recovery operations.

Dr David Errickson, Lecturer in Forensic Archaeology and Anthropology at CFI, who attended the orientation, said: “We are honoured to be collaborating with the DPAA and to be part of the effort to recover conflict casualties and provide those who gave their lives with a dignified burial.

“The orientation provided has been delivered by some of the world’s most experienced practitioners in this field. Worldwide, and particularly in Europe, there are a very limited number of organisations working to recover conflict casualties and so this partnership is an extremely valuable opportunity, including for our graduates, who will also be involved to search for the missing.”

G.R. (“Rocky”) Gillette, Deputy Director of Partnerships and Innovations at the DPAA, said: “DPAA would like to express its appreciation to Cranfield University and all our partners who are assisting us in achieving the fullest possible accounting for past conflicts.”

The project team from Cranfield consists mostly of graduates of the Forensic MSc programme at CFI. They are experienced in employing forensic and archaeological methods to carry out recovery operations and have conducted excavations across Europe as well as further afield in the South Pacific.

DPAA is an agency of the US Department of Defence and was formed from the merger of several smaller agencies in 2015. Its mission is to locate, identify, and repatriate the remains of American personnel from past conflicts (including WW2, the Korean War, the Vietnam War, the Cold War and the Iraq and Persian Gulf Wars) who are unaccounted for.