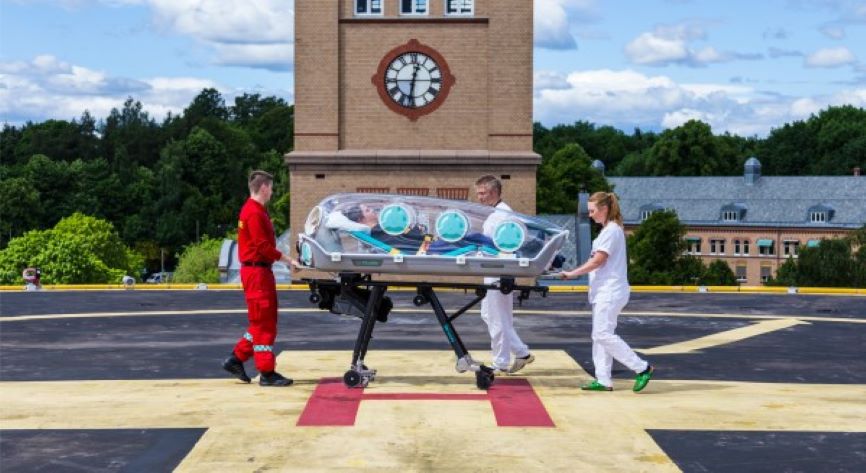 The three Air Forces and the German Air Ambulance have all deployed the isolation pod. The EU supported EpiShuttle was developed by doctors and engineers at the Norwegian company EpiGuard.

The use of the isolation pod brings with it a number of benefits to both the user and the patient and can help to increase vital ambulance/air ambulance capacity at a vital time.

Without using the system an ambulance or aircraft would normally require two – four hours of disinfection between every transport. Isolation pods reduce the need for disinfecting the ambulance, protecting both the crew and the next patient from being infected.

While the single patient isolation systems increase the capacity of our healthcare system by making evacuations and transport between hospitals more effective. The EpiShuttle allow patients to receive treatment during the evacuation while protecting the crew.

EpiGuard CEO Ellen Cathrine Andersen said: “We must be able to transport Covid-19 patients to where capacity is available, only then can we utilise the full capacity of the entire health care system and ensure treatment.

“Healthcare workers are making an admirable effort transporting patients and at the same time putting their own heath on the line, but if we have to disinfect all helicopters, aircraft and ambulances after each transport, the whole system may collapse.” She also emphasises the importance of safe transport of infected patients inside the hospital.”

She added: “A hospital is the one place you find the highest concentration of people at risk, where infections will have serious consequences,” noting that the isolation stretcher could be beneficial for isolating “both very vulnerable patients and the virus. The isolation stretcher can also be used with overpressure for transport of very vulnerable patients, ensuring that these patients are not inflicted with outside infection.”